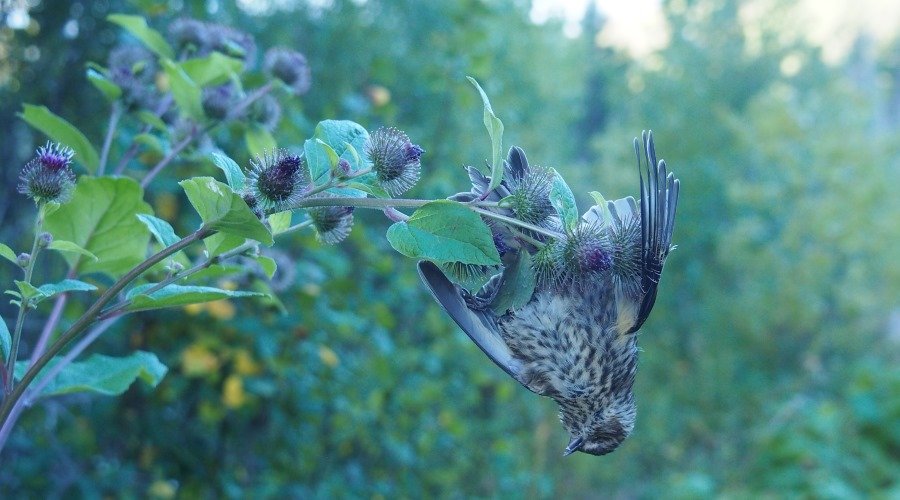 Here at WSF we are working to tackle the Burdock (Articum lappa) in the Five Mile Ridge area. In 2009 there was a fire on Five Mile Ridge and subsequently several invasive non-native plant species colonized the disturbed area and have since outcompeted native pioneering plant species. Invasive species impact ecosystems by altering the plant composition and soil dynamics. They are often faster growing than native species and often displace or eliminate rare and uncommon plant species. They alter the structure and function of an ecosystem, which has ramifications for the wildlife of the area. Burdock is classified as noxious under the BC Weed Control Act. It produces ‘sticky’ seed heads called burrs that can have injurious effects on wildlife. Dead bats and birds have been found trapped in the seed heads and the matting of animal hair by the burrs can reduce thermal insulation. The burrs have also been reported to cause eye infections.

In order to control the plant, it is important to take its lifecycle into account. Burdock is a biennial plant. In its first year it produces a large rosette of broad leaves. Following a period of dormancy over the winter, it produces bushier leaves during the second year, followed by a flower stalk. The flowers bloom in late spring to mid-summer, forming burs in late summer. The root of the plant dies once the burs have formed. We aim to cut the second year burdock plants after flower production, but before the burrs are mature, hopefully once the root of the plant is already dying. We collect the cut plants and burn them. This method removes the seeds before they are spread and reduces the risk of injury to wildlife by the sticky burrs.

The burdock growing on Five Mile Ridge is mainly restricted to the sides of roads and trails, with a few larger pockets.  This week WSF team members teamed up staff from Chilcotin Holidays to cover as much of Five Mile Ridge during this important time in the burdock lifecycle as possible. It was daunting to see the large areas of burdock that needed cutting and very satisfying to see the results of our efforts. Unfortunately, we found a dead bird that had been trapped in the burdock seed heads during our efforts and this strengthened our resolve to continue.

The control of invasive species is particularly important in this area because we do not want them to spread into the Provincial Park. We have a long-term plant to map the density of the burdock and concentrate our efforts on high traffic areas and areas close to the Park. As part of the restoration of Five Mile Ridge, we plan to implement a planting program to increase the native plant composition of Five Mile Ridge. Among other species, we propose to plant snowbrush (Ceanothus velutinus). Snowbrush is an important winter food source for Mule Deer and Bighorn Sheep and the fire also negatively impacted its abundance on Five Mile Ridge.