The Wilderness Stewardship Foundation (WSF) and its partners have been involved in wildlife and habitat surveys and conservation projects for 30 years, working with local operators in the Bridge River Valley Watershed area to help collect data and gain a solid knowledge base.

We are involved in conservation efforts and provide input on management plans for the area. This history has given the WSF a wealth of experience, understanding and knowledge of the ecology of the area, in addition to conservation and management needs, and a network of partners and supporters to help achieve its goals.

WSF is a stewardship society, undertaking hands-on projects to improve and manage the ecology of the area, carrying out research, and working with the government and local initiatives to conserve and sustainably manage our natural resources.

Find out more about our current and future projects below:

Dating back to 1991 the population of Bighorn Sheep has been surveyed in the Shulaps Mountain Range and Big Creek/Relay area. WSF together with it’s partners obtain accurate population numbers for each group, as well as yearly lamb survival (recruitment), migration patterns, winter ranges, summer ranges and predator impact. Aerial surveys are periodic and ongoing in this area. 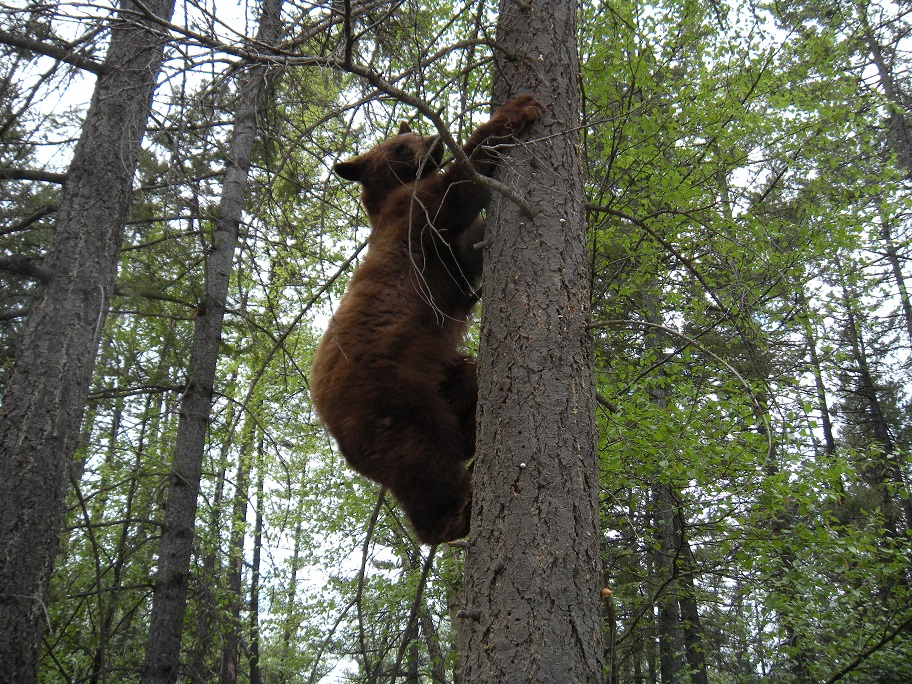 WSF partners with several researchers and projects collecting DNA data from animals. Like DNA samples from upland game birds such as grouse and ptarmigan. We collect DNA from black bears, grizzlies and mountain goats. 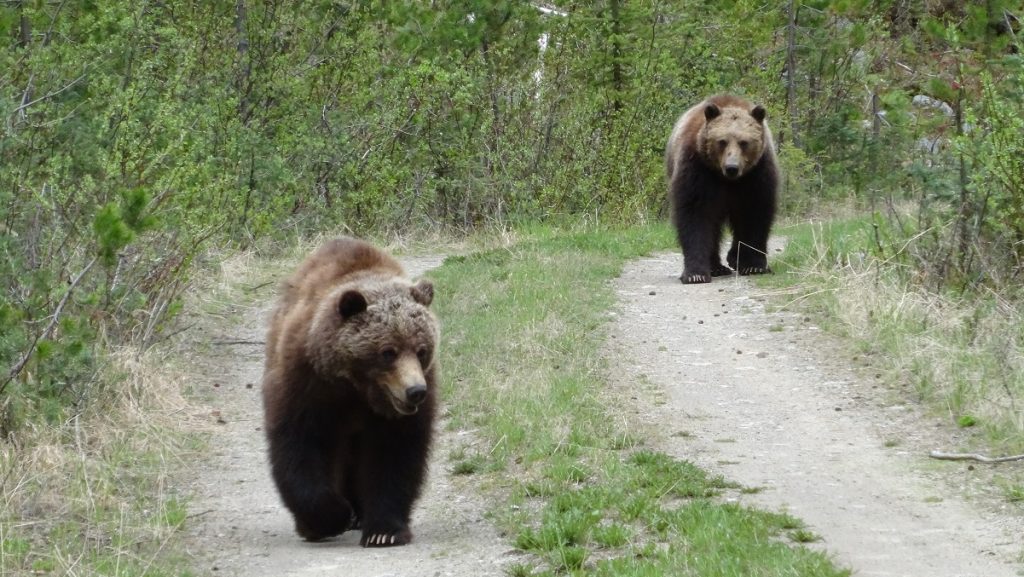 The grizzly bear population in the Bridge River Valley appears very strong. Reproductive success is a good indicator of this, we see that most sows have three cubs and some even four at a time. We recognize a pattern that young bears are moving into less suitable habitats to establish a home range because the most suitable habitats are occupied by older bears.

WSF and its partners collect samples of grizzly hair from the rubbing trees to establish population statistics in the Chilcotin Mountains and the Bridge River Watershed. Using DNA analysis from the collected hair, we plan to determine population size and habitat use over seasons and across years. We are also learning more about diet through stable isotope analysis. Of particular interest is the importance of whitebark pine, an at-risk species, in their diet. 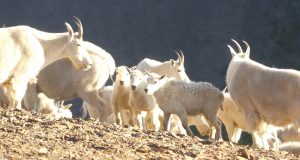 Mountain goats (Oreamnos americanus) are a relic of the ice age and their body shape and colour make them adapted to few habitats. British Columbia contains an estimated 52% of the population and is therefore especially responsible for habitat and species conservation. Mountain goats are not considered at risk, but under the BC Conservation Framework, are the highest priority for protection.

We are monitoring goat populations in the area to determine population size, trends and demographics and ensure healthy populations. Population counts are conducted by aerial surveys in the Bridge River Watershed and are currently showing stable populations.

Like many animals, mountain goats through a spring moult to shed their thick winter coats. We have also been collecting samples of this moulted hair for future research analysis.

Like many animals, mountain goats through a spring moult to shed their thick winter coats. We have also been collecting samples of this moulted hair for future research analysis. 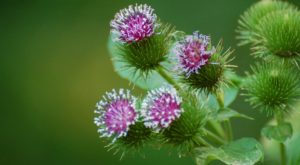 Invasive plants are a major threat to native ecosystems and often degrade vital habitat areas. Areas of concern within the Bridge River Valley watershed include an important ungulate wintering range. One of these areas is the Five Mile Ridge where a forest fire in 2009 destroyed most of the vegetation. Several invasive plant species, like Giant Burdock (Articum lappa), Canada Thistle (Cirsium arvense), Common Mullein (Verbascum thapsus) and Spotted Knapweed (Centaurea biebersteinii) quickly invaded the area thereby outcompeting indigenous species and negatively affecting the local ecology. These species have the capacity to aggressively reproduce and establish in a habitat, displacing original vegetation and crowding out rare and endangered species. Furthermore they reduce the quality and yield of crops and pose a threat to livestock and wildlife.

We monitor, map and manually treat invasive species sides in the Bridge River Valley. This project is designed to mechanically control and prevent further spreading of the above-mentioned species in order to restore and preserve the native ecology of the South Chilcotin Mountains. 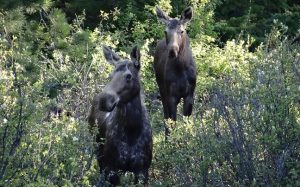 Cutblocks, burn areas, and avalanche slide areas can become a beneficial habitat for moose. This is because moose rely on many early seral stage species for their winter diet. These species include willow, wild rose, highbush-cranberry, aspen, birch, and red-osier dogwood. These species thrive when overstory trees are removed, by natural or human disturbance, which allows light to penetrate to the forest floor. Moose preferentially browse on new growth, fresh leaves and sprouts, up to 2.5 meters high. However, once browse species exceed this height, moose can no longer forage on them. So in order to maintain moose winter habitat we are pruning back important browse species in key moose areas. 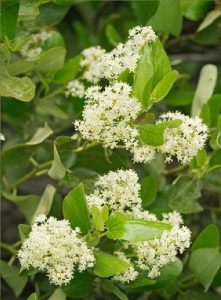 Snowbrush (Ceanothus velutinus) is an essential food source for Mule Deer (Odocoileus hemionus) and Bighorn Sheep (Ovis canadensis). However, the abundance of this plant was negatively affected in the Bridge River Watershed after the 2009 forest fire. The purpose of this project is to enhance the winter habitat for Mule Deer and Bighorn Sheep by rejuvenating the population of snowbrush. We will collect seeds for sowing so we can create a self-dependant propagation in the following years, thereby supporting the future populations of Mule Deer. 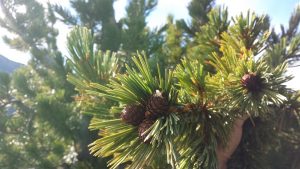 Whitebark Pine (Pinus albicaulis) is a keystone species with an important role in the subalpine ecosystem reducing soil erosion, facilitating plant succession, capturing and retaining snow thereby increasing duration and quantity of summer run-off and providing an important food source for wildlife such as the grizzly and black bears, red squirrels and Clark’s nutcrackers. The whitebark pine has coevolved with Clark’s nutcrackers depending on the nutcracker exclusively to disperse its seeds.

White pine blister rust is a serious disease affecting whitebark pine throughout its range in British Columbia.  The fungus travels from the needles to the branch and trunk of the tree and can eventually kill the tree.

Large outbreaks of Mountain Pine Beetle also infests whitebark pine stands, threatening the population. Whitebark pine is particularly vulnerable to this infestation when already infected with White Pine Blister Rust.  The loss of essential whitebark pine habitat due to mountain pine beetle infestation results in a loss of the ecosystem services it provides, with severe consequences for a diversity of wildlife.

Other factors that threaten whitebark pine include climate change which is expected to result in a shift in suitable habitat and influence disease and pest occurrent, fire suppression which has also led to increased competition from other, more shade tolerant species and harvesting of whitebark pine, which is also a factor in their decline at lower elevations.

In order to conserve whitebark pine, it is necessary to monitor the health of populations, screen for blister rust and collect, propagate and plant seeds to aid the regeneration of trees. Whitebark pine is a slow growing species that does not reach reproductive capacity until it is around 40 years old. Therefore it is important to act fast to ensure rust resistant individuals are propagated and planted.

We have been involved with assisting with data collection; the fitting of cages to allow cones to reach maturity prior to collection and transect data collection to monitor the health of the trees. Cones collected by us have been delivered to a nursery for propagation and blister rust screening.