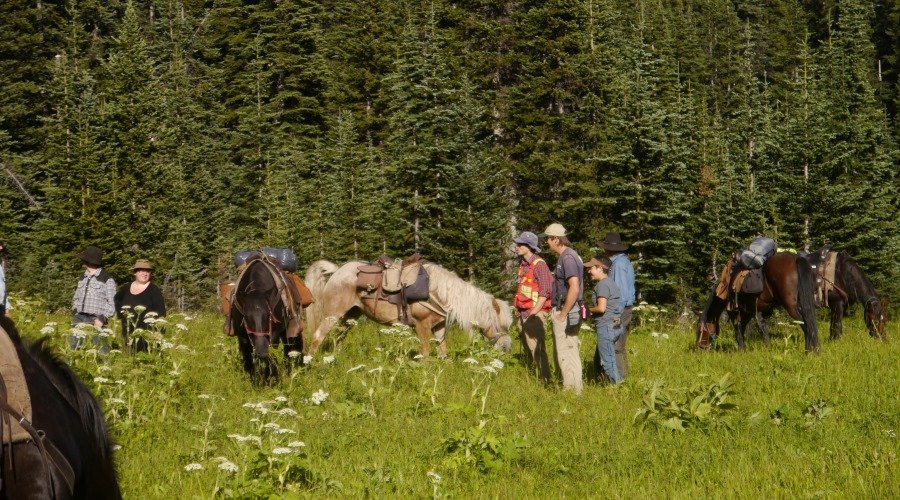 Yesterday, I was lucky enough to join a local biologist in some whitebark pine surveys in the South Chilcotin Mountains Provincial Park. Whitebark pine (Pinus albicaulis) is an endangered five-needle pine that occurs in the mountainous regions of British Columbia, Alberta and the U.S.A. It is considered to be a keystone species in sub alpine ecosystems. It is a stone pine species with the largest seeds of all the conifers in British Columbia. The nutritional value of the seeds are greater than those of other conifers making them an important food source for many wildlife species, including the Clark’s nutcracker, grizzly bears, black bears, wolverines, ground squirrels, red squirrels and chipmunks. The Whitebark pine has coevolved with the Clark’s nutcracker revealing an interesting mutualistic relationship. It relies on the nutcracker, a bird whose primary food source is the whitebark pine seeds, to disperse its seeds. A single nutcracker caches up to 98,000 seeds in up to 7,500 places for its fall and winter food supply. It consumes around half of them, leaving the others a chance to germinate.

In recent years there has been a rapid decline of whitebark pine in British Columbia due to white pine blister rust, mountain pine beetle, fire suppression, increased competition by other tree species and harvesting. White pine blister rust affects whitebark pine throughout its range in British Columbia. It is a serious disease that also infects members of the Ribes genus (currant and gooseberry family). Spores released from the leaves of the Ribes plants land on the pine needles and travels to the branches and trunk of the

Biologist Randy and his team are employing a variety of methods to monitor and promote regeneration of whitebark pine. They conduct transects to monitor the health and reproductive ability of the trees, recording the size of the trees, extent of any blister rust, the presence of cones and the overall health of the trees. Randy returns to each transect site every five years to monitor the trees. Cones are collected from the trees to allow propagation, planting and research into blister rust resistance. The cones are identified during the summer and cages are fitted around a selection of cones to protect them from consumption by wildlife whilst they mature. They are then collected once mature, propagated in nurseries and screened for blister rust resistance before being planted. Cones are collected from trees in different areas to maximize genetic variability and therefore the potential for rust resistance. Cones are also collected for research into the potential to mature the seeds when removed from the tree early, which would remove the need to cage cones and return to stands at the end of the season. Ken, an ornithologist on the team, studies the Clark’s nutcracker distribution and abundance within whitebark pine stands. The whitebark pine seeds are one of the preferred foods of the nutcracker, which is important in the lifecycle of the whitebark pine since it plants the seeds by caching them for winter food supply.